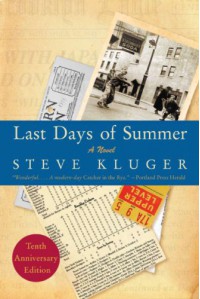 This is a MUST READ book!

It's 1940 and Joey is a 12 years old Jewish boy living in Brooklyn after his parents divorce.  Joey's had a rough start in the new area.  He's being bullied pretty badly, made some bad decisions, and has come to the conclusion that there is only one way out of this mess.  He has to get up and coming rookie for the New York Giants, Charlie Banks, to hit a home run and dedicating it to him, Babe Ruth style.  All he's gotta do is convince him.  This leads to one of the most special and endearing friendships I've ever read in a book.

"It is Joseph's opinion that he open his Bar Mitzvah speech 'with a few laughs to loosen them up'- more specifically, that worn-out routine chronicling Moses' descent from the mountain with the Ten Commandments, concluding with the epigram 'Adultery's still in.'  Given the manner in which the two of them recited the punch line in unison, I gather that Mr. Banks and your son are a well-suited match.  So, however, are Laurel and Hardy." - Rabbi Morris Lieberman

I have to warn you, this book is written entirely through letters, report cards, therapist notes, newspaper articles, and baseball stats.  I was a little nervous going into it, thinking that it would make it difficult to get a feel for these characters and build a reader/character relationship.  Yeah, not a problem at all.  I loved each and every one of them just as deeply as one possibly could.  Joey was so clever and fearless, even though he was only 12 years old (14 at the end) I truly admired his gumption.  I laughed outloud at the boys antics.  Poor Charlie never stood a chance, thank goodness.  He could be a 'tough guy' all he wanted, but inside he was a big softy.  (Don't even get me started on Craig, Aunt Carrie, Hazel and Stuke.  They are all so well written and 3 dimensional.)

And the book was FUNNY.  Laugh out loud funny, I'll have you know.  There were wisecracks and one liners littered throughout the whole thing.  Here's just a taste of one that had me laughing outloud!

This is Charlie quizzing Joey on the Torah before his Bar Mitzvah:
"3. How old was Noah when God gave him the job?
76.
600.
Says who?  And how come God thought an old fart like that could build a boat?  He'd be lucky if he could still pee."

If you don't read this you're missing out, seriously.  Sure it's about baseball, and if you're not into sports you may not understand the baseball stats.  I sure as hell didn't, haha.  It doesn't matter because love is what this story is really about.  It's about love and everlasting friendships.  I absolutely loved it.  I can guaran-damn-tee that I will be buying this book for my bookshelf and I'll be reading it again and again.  I can't wait to read others from this author.  Beautiful and Brilliant

"Dear Aunt Carrie and Mrs. M,
Hazel did some nosing around and found out that there are 19 million kids in the U.S. of A.  Only 10 of them are going to the W. House today.  You can do the math yourself on account of I would not get near long division with a 10 ft. pole.  But if you tell people that he is one in a million, you would be pretty close to the mark.
Charlie