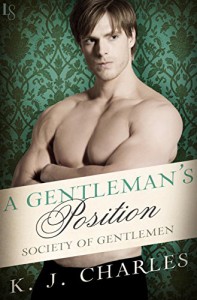 It’s fair to say that those of us who’ve been reading Society of Gentleman have been pretty excited to finally read about Richard and Cyprian. From the very beginning Cyprian has been the glue that ties this Society’s secrets together, keeping them all safe. We’ve known for a while that the relationship between Richard and Cyprian runs far deeper than Lord and valet, even if they have outwardly, and privately, maintained an appropriate employer/servant balance. We also knew that at the end of A Seditious Affair Cyprian was tired of waiting and was beginning to make steps to turn Richards attentions on himself.

So, you can maybe understand my surprise when I actually read the book and it doesn’t play out at all like I thought it would. Through the entire course of the series David Cyprian has been a force. He saved lives, he ruined lives, he did whatever it took to keep Richard and his friends safe. To me, at least, he was such a badass. He’s Foxy, slightly scary in his abilities, both as Richard’s valet and as Richard’s flashman. I felt sure that he would quietly and sneakily manage Lord Richard right into his bed. That’s not exactly how it played out. What does happen is a lot more heartache and hurt feelings, which took some of that magic shine off Cyprian.

In A Gentleman’s Position Cyprian was humanized. Most of the time, that’s a great thing. I’m sure for most readers it was wonderful to read Cyprian vulnerable. I actually liked seeing that Cyprian was vulnerable to Richard too. I like when Badass Characters are vulnerable to the one they love. I think my issue lay more in how Cyprian seemed to lose some of his strength. Granted, he was Mr. Fox, and being a fox implies more cunning than brute strength, so I completely agree that it just could have been my bar was too high. He was still plenty cunning in the third book. He still had a sharp smile and a quick mind. He also felt just a little more whiny… don’t kill me, I know it’s unfair! I just can’t help feeling this way!

My immeasurable bar standard for Cyprian was the only thing that brought my rating down. The plot itself was very good, tying all three books together. The whole group was together, as stuffy and funny as ever, and Richard’s love for his Mr. Fox was beautiful, as was Cyprian’s love for his lord.

With the conclusion of A Gentleman’s Position I do believe that this series is over. I feel like it happened so fast. It feels as though I only just read my first K.J. Charles novel with A Fashionable Indulgence. I won’t be unhappy if I were to hear that there’ll be more, and if not there’s always A Charm of Magpies!

Thank you to Loveswept and Netgalley for providing a copy of his book, in exchange for an honest review.

To read this review and more, visit us at Badass Book Reviews